We are happy to announce that the final report of the DIVER project is now available for download via this link:

This year the genetic gender determination for divers tagged in march 2017 showed a little more balanced result with 5 females and 3 males but again still more females than males. As before information on the sex of each individual is given in short bird profiles next to the tracking map.

Furthermore, since beginning of July divers are back in their breeding areas! Most of the birds tagged in 2017 headed to breeding areas in Siberia but two birds flew to the south of Svalbard, thus within this study a new potential breeding spot can be added to the used sites in Siberia, Greenland and Norway.

During this yearâ€™s capture season 8 more red-throated divers were tagged successfully and the objective of the project is achieved. From now on, the tracks of newly tagged birds can be followed online. The first diver already left its wintering area in the North Sea. During the next weeks it will be exciting to watch their migration towards the breeding grounds.

This yearâ€™s BOU conference â€From avian tracking to population processâ€ took place from the 28th to the 30th of March 2017 at the University of Warwick (UK) and some results of the DIVER project were presented.

The conference covered topics of movement ecology and their consequences for a suite of population processes. The objective of the conference was to bring together ornithologists and ecologists from academic and conservation organisations, to explore how the tracking of individuals can help to address key questions about population processes and their implications for conservation and management.

The two posters featuring the DIVER project displayed data of tracked red-throated divers, where one focused on site fidelity and temporal consistency during migration, moult and wintering, while the other had its focus on mobility and space utilisation during the annual cycle.

As part of the DIVER project an international workshop on Red-throated Divers was held at BSH premises in Hamburg on 24-25 November 2016. The workshop was a great success with more than 40 diver researchers from different countries, representatives of German regulators and offshore wind energy industry attending the meeting.

During the 2 day meeting interim project results of the DIVER project were presented and discussed as well as presentations of international diver experts from Germany, Denmark, Sweden, the Netherlands, Lithuania, UK and USA. Main focus of the workshop presentations and discussions was on the effect of offshore wind farms to divers, but also different aspects of diver biology, such as diver diet and migration patterns.

The workshop agenda as well as most of the presentations (published with the permission of the authors) can be found below.

Ramūnas Žydelis (Denmark): Red-throated Diver habitat use in the German North Sea based on telemetry data

Carrie Gray (USA): Red-throated Loon telemetry project in the US

Mats Eriksson (Sweden): Levels and trends in the Swedish population of Red-throated Diver in Sweden

Richard Caldow (UK) (presented by Sue Oâ€™Brien): Red-throated divers in the UK: site-based protection at sea and assessment of effects of marine activities in protected sites

As part of the DIVER project, data from two large-scale digital aerial surveys performed in April and May 2016 covering the core diver wintering and staging area in the German North Sea were analysed. These surveys were conducted within our partner project HELBIRD of the â€œForschungs- und Technologiezentrum Westküsteâ€ (FTZ, Büsum, Germany).

A total of 1,427 (April 2016) and 1,122 (May 2016) divers could be detected on the recorded video material from these surveys. Originating from a coverage of 6.55% of the study area, a simple extrapolation of these numbers leads to estimates of approximately 21,700 and 17,100 divers, respectively, in the surveyed areas for these two months. Identification rate of divers was high for both surveys with more than 97% of divers being identified to the species level. Almost all divers identified were Red-throated Divers. These numbers indicate that diver abundance and especially that of Red-throated Divers is considerably underestimated in the standard data forms of the Natura 2000 areas in this region: there 3,580 divers (3,300 Red-throated Divers) are listed as a maximum estimate for the SPA â€œEastern German Bightâ€ and 10,500 divers (10,000 Red-throated Divers) for the larger SCI â€œSylter Außenriffâ€.

Spatial modelling which will be conducted on these aerial survey data at a later stage will allow for more precise estimates of diver abundance and distribution patterns. 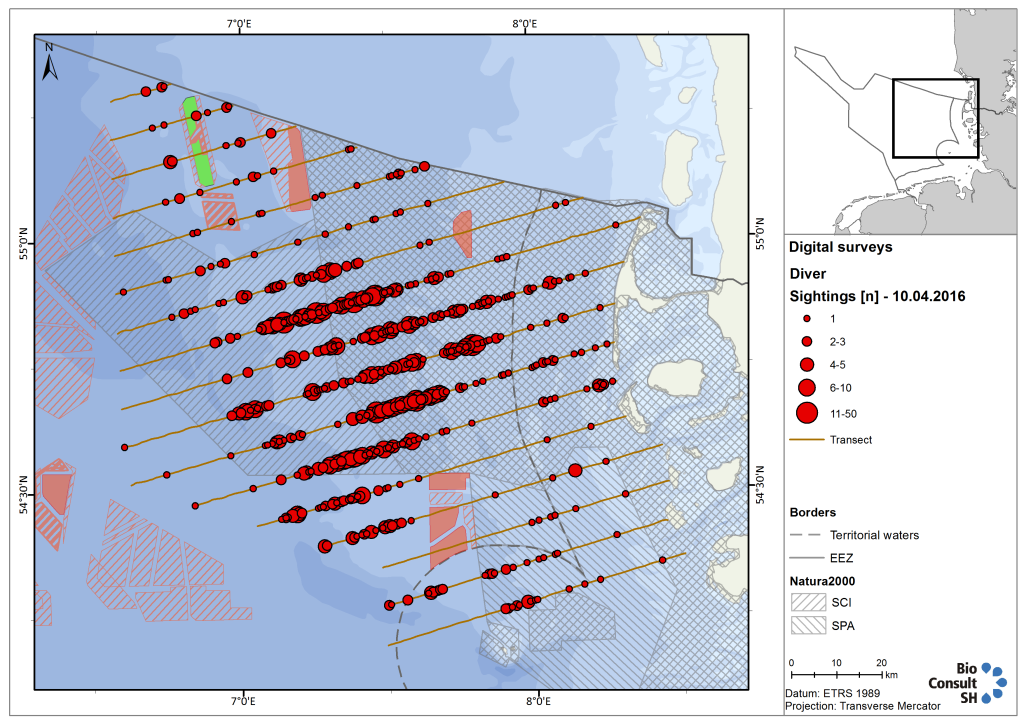 As in the year before, the genetic gender determination for divers tagged in 2016 resulted in much more females caught than males. Information on the sex of each individual is given in short bird profiles next to the tracking map. The reasons for why there are so few males captured are unknown. Could be that males mainly use different areas in late winter or show different timing than females.

First Red-throated Divers tagged in 2015 and 2016 have left their breeding areas. It will be exciting to track whether birds will use the same migration routes and stop-over sites as last year or on spring migration, respectively. Will all birds return to the capture area the German North Sea in the course of the winter season?

Please check out diver tracking map. 18 new birds captured and tagged in spring 2016 are online now. First birds are already leaving the North Sea, so the next weeks will be interesting where all birds will end up during breeding season. Please note – there are two map views to choose now. One with tracks of birds tagged in 2015, one with tracks of new birds.